Many of our criminal defense clients have already been arrested by the time that they come to us.  They may have been pulled over and arrested for a driving offense, the police may have been called to their home or other location and chosen to arrest them, or perhaps they may have been arrested out of the blue as part of a police investigation.  Those clients have already been through the arrest process, but often times wonder if the rules were followed during the arrest.  They may wonder how their Miranda (constitutional) rights come into play, or how the police could have searched them or seized their property.  These are all frequent questions we hear as criminal defense lawyers.

What to Do if you are being Arrested

My advice to a client who is being arrested is to make an effort to relax, be polite, yet be sure to assert your constitutional right to a criminal defense attorney. There is no use arguing with a law enforcement officer who is arresting you, as this just elevates the perceived level of danger to them and increases the chance that you will end up injured, or facing additional criminal charges from the encounter.  The officer has a job to do, and you should let them do it while politely requesting that you be provided with an attorney, before you answer any questions.  In most cases you can feel free to offer basic information such as your name, address, date of birth, and drivers license information.  However, you should not allow these questions to transition into any other conversation or questioning.  Police officers are trained to extract information from suspects, and you may not know the importance of their questions, and your subsequent answers.  Often times police officers or detectives have a way of transitioning from casual conversation to interrogation, in a seamless way.  The best way to avoid this is to simply say "officer I would like to speak to an attorney before answering any questions", and leaving it at that.  No matter what the officer talks about on the radio, or with his/her partner, or with the jail booking staff, don't take the bait and resume conversation.

Sometimes my clients think that asserting their constitutional right to an attorney or remain silent will "make them look guilty".  I assure them that if a police officer or detective is questioning them, in all likelihood they already think they are guilty.  Let the defense lawyer work on persuading others of your innocence, don't try to do it yourself and end up damaging your case.  I have very rarely seen a case where a defendant helped themselves in making statements to a police officer, and conversely where defendants make statements they usually end up hurting their case.

The Miranda warnings that the police give in Washington are listed in the image below.  This form is used by the Washington State Patrol, but most agencies have a similar format and content: 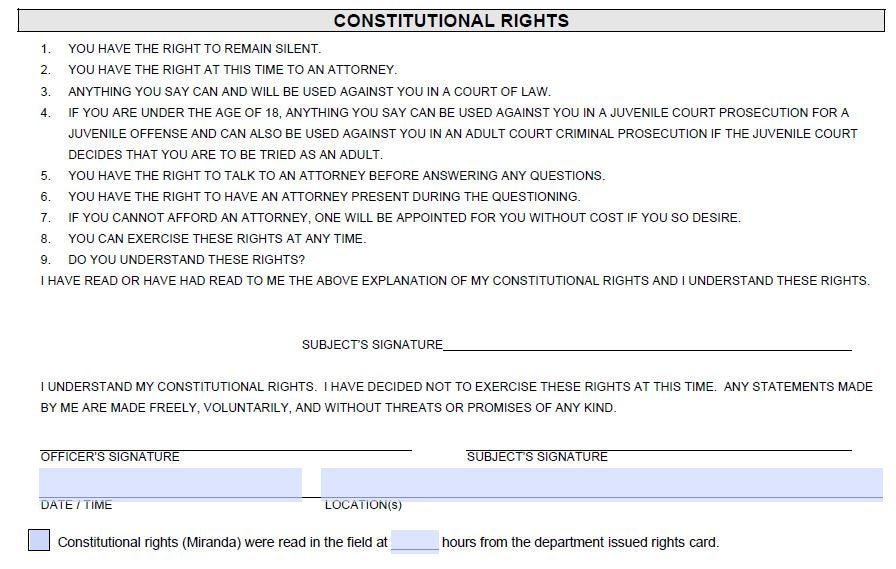 Most of the police reports that I see from the Washington State Patrol are signed by the subject in both places above, indicating that the subject has been provided their Miranda warnings, and also that they are willing to waive all of their constitutional rights.  Obviously that is a huge mistake, and I can imagine a police officer handing the subject a pen and stating "sign here in both places to acknowledge your rights and indicate that you want to talk to me", at which point the person signs and waives their rights, without ever considering the consequences.  Demand your rights, never waive them!

While you have a constitutional right to an attorney prior to being questioned, you don't have the right to one if you are not questioned.  Therefore when a person is initially arrested, the police will often stop asking questions once someone invokes their right to counsel. So don't be surprised when the police don't produce a lawyer, or provide you with the means to contact one, while you sit in handcuffs.  You should simply wait until you are released, or booked into jail and then contact attorney when you have the ability to.  Our office takes collect calls from all jails, and we are willing to assist those who need help, any time of day or night.

You should also remember that anyone you encounter once arrested could be an informant.  I have seen cases where fire personnel, ambulance drivers, medical workers, jail personnel, co-defendants, and jail inmates provided information that hurt my client's case.  Most of these people are going to side with the police, and they won't hesitate to provide them with helpful information about you.  Fellow inmates may seem talkative and friendly, but they are often fishing for information to trade against their own charges with the prosecuting attorney.  I once saw one inmate in the Pierce County Jail offer information concerning every one of his cell mates, in order to assure a lighter sentence for himself.

Do Not Consent to Any Searches

If you are arrested, your criminal defense attorney will always tell you to decline to allow any searches.  I am constantly amazed by people's willingness to allow voluntary searches of themselves, their cars, their homes, and their property.  Even people who know they have something to hide will consent to these searches, sometimes even after being given verbal and written warnings that they do not have to consent.  Never consent to a search.  If the officer tells you that they will get a warrant, then let them.  As a criminal defense lawyer, if a person consents to a search I have very little ability to suppress the results of that search.  On the other hand a police officer, or judge can make a number of mistakes in the process of applying for, issuing, or executing a search warrant, and I can then seek suppression of the evidence, if certain errors were made.

Advantages of Turning Yourself In

At times people come to us prior to being arrested.  They have some reason to believe that they will be arrested or charged with a crime, and they are hoping to avoid the embarrassment of being arrested in front of their friends, family or coworkers.  If the person has not been arrested yet, we may be able to make arrangements with the police officer or detective who is working on the case to surrender the person for booking at a mutually agreeable time, to avoid the stress of a surprise arrest.  Often time police are willing to allow this, as it is safer and more convenient for them, and saves them time.

Criminal defense provided with professional integrity and 60 years combined experience in criminal defense cases. Available 24 hours a day, 7 days a week.  Call us at (253) 867-2675 to schedule a free initial consultation.

If you are interested in more information, see our next section on Conditions of Release & Bail.