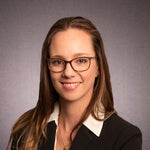 Katelyn earned her undergraduate degree at the University of California - Davis, before moving to Seattle to attend law school at Seattle University, where she successfully earned her Juris Doctorate degree.  During law school, she worked for the Northwest Justice Project in Seattle representing clients facing domestic abuse.  Katelyn also worked alongside an appellate court justice for the 6th District Court of Appeal in California, where she assisted in drafting the court's legal opinions.

Katelyn has been handling criminal cases ever since, and has over a decade of experience in our local courts:

In Superior Court, Katelyn represented clients charged with Class A felony offenses, Class B violent offenses, and adult sex offense cases. Katelyn has a strong passion for trial work, which drives her to work tirelessly on behalf of her clients. If she was not in one courtroom arguing a motion to suppress evidence, she was probably in the middle of trial in another courtroom.

Katelyn's trial experience, coupled with her attention for detail achieved positive results for her clients.  In her last three months in her office's felony unit, she won back-to-back not-guilty verdicts, followed by a dismissal at trial for destruction of evidence. Her advocacy on those three cases alone saved those three clients over 10 collective years of prison time.

In addition to her work as a trial attorney, Katelyn spent several years representing clients in many of King County's diversion/treatment courts, including Mental Health Court and Drug Diversion Court. While in Drug Court, she challenged the then-new RCW regarding Drug Court eligibility, and argued the issue of first impression in front of the Court of Appeals.

Katelyn is a defense attorney to her core. She feels strongly about her role in holding the government and police accountable to the citizens they claim to protect. Katelyn is similarly committed to guiding clients with compassion through what is often lowest time in their lives.